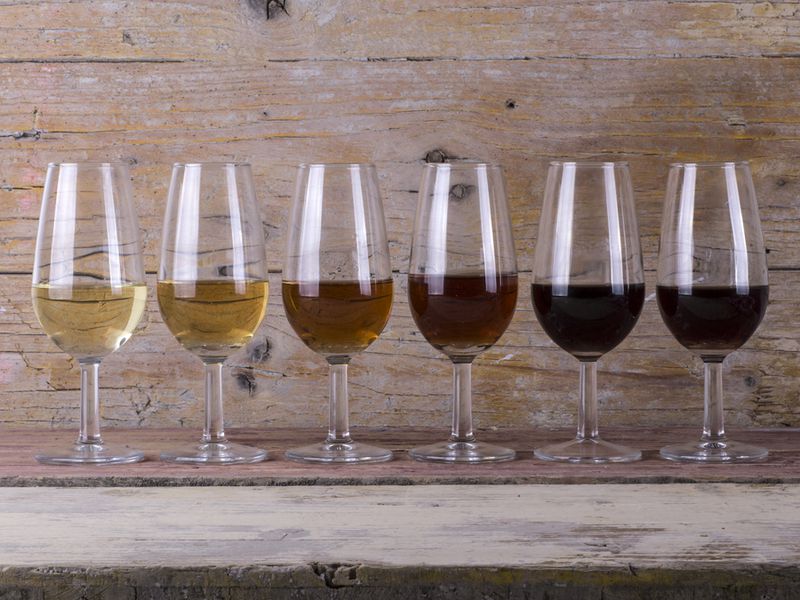 Not all “dessert” wines are sweet. Here’s how to drink.

For many, the term “dessert wine” invokes thoughts of syrupy tipples saccharine to the point of undrinkable. The oft-misunderstood and broadly sweeping category of dessert wines—or “stickies” as the Aussies call them—may have fallen out of vogue on the American table decades ago, but these complex, elaborately crafted tipples can offer one of the most unique sensory experiences in dining. And here’s the rub: they’re not even always sweet. Often, types of wines clumped into the “after dinner drink” department are made in a spectrum of styles, and while here in the U.S. the sweeter versions are more commonly known, drier styles exist, too. Like Sherry, which ranges from crisp, dry fino and manzanilla to viscous, sugar-laden Pedro Ximénez known as “PX.”

Dessert wine is really a clumsy catch-all for dozens of wines that have one thing in common: high-octane alcohol.

Dessert wine is really a clumsy catch-all for dozens of wines that have one thing in common: high-octane alcohol. All it technically takes is an alcohol content of 14 to 24 percent to be lumped in. But it’s how these wines are made that differentiates them. Standard table wine is born when yeast eats grape sugar and creates alcohol. But making dessert wines involves additional, often arduous steps to achieve the grapes’ richest complexity. This can happen by concentrating the grapes’ juice through freezing (ice wine), raisinating (straw wine), or even rotting (yes, rotting—with a benevolent “noble rot” called botrytis), to remove water and leave only intensely concentrated pure fruit behind. Wines such as Sherry can be fortified with a neutral spirit to stop fermentation, sometimes (but not always!) leaving sugar in the wine, and then aged so flavor develops. The key here is acid. As long as a wine carries enough of a zing in its backbone, it can balance out sweetness and show rich flavors with grace. Take, for example, sweet wine and cheese. Many dessert wines are characterized by high acid and softer tannins, and these attributes complement the savory umami qualities of cheese. Think full-bodied Port with a big blue cheese or a high-acid Madeira with a creamy Gouda.

Fortified wines (the general category of wines to which a distilled spirit it added, often brandy) in particular can often be bone dry, and the rich, concentrated flavors of these wines pairs beautifully with hearty fall dishes. Though, of course, there are exceptions. Sauternes, a famed sweet botrytised wine from Bordeaux, France is out of this world when served with seared foie gras, while dry fortified wines like fino Sherry tend to be the most flexible at the table. In fact, despite its popular image as a sweet wine, most of the finest Sherries are dry.

From the Jerez region in Southern Spain, Sherry is made by adding grape spirits and older Sherry to young wine, then aging it under a thin veil of yeast called flor. This magic yeast layer protects the wine from oxidation, while imparting a hint of salinity and a lot of depth. As it ages, over at least two years, Sherry from older vintages is added via a rotating system called Solera. The resulting wine varies by type quite a bit, with differing levels of exposure to air, aging, and sweetness, but a good fino Sherry will be light and delicate, with almond notes and a salty tang. Sherry makes for a dynamite pairing alongside its regional cuisine counterparts: olives, Iberian ham, almonds, and a plate of shellfish or grilled sardines.

…despite its popular image as a sweet wine, most of the finest Sherries are dry.

Madeira, from a set of Portuguese islands off the coast of Morocco, is another fortified libation that can be a boon companion at the dinner table. The Brits developed a taste for it centuries ago when the wine accidentally became oxidized on long sea voyages from Portugal. The nutty, caramel aromas that resulted became the defining character of the wine. Like Sherry, Madeira is fortified with a grape spirit and aged for years. But Madeira’s unique flavors come from heat, either in the form of heated coils or warm attics (where the wine sometimes ages). Madeira is classified based on four major grape varietals: Verdelho, Bual, and Malmsey, (which Madeira expert/writer Noël Cossart says pairs best with “Havana cigars and intelligent conversation”) and Sercial. Of all its different incarnations, Sercial—a white grape known for racy acidity and bright lemony notes—is the driest. It is fortified later in the fermentation process, when the yeast has already consumed most of the sugar. Sercial has distinguishing zippiness; it can cut right through a creamy mushroom soup or bring out the citrus notes in the islands’ local dish of espada fish in a tropical fruit sauce.

And then there’s Port, popular in England since the 17th century. While most wines in the dessert category are made from white grapes, Port is generally produced from red grapes, giving it a vim and vigor that stand up to hearty foods. Chocolate and caramel desserts are classic companions, but so are blue cheese and sweet-smokey meats. Alongside a blue cheeseburger or chicken mole, ruby Port on the rocks with lime zest (a popular way to imbibe) will sing.

Port is produced in several styles, but the two most common are Ruby and Tawny.

Port is produced in several styles, but the two most common are Ruby and Tawny (though white and rosé Port are also picking up steam). Port is fortified with brandy and aged; from there it diverges. Ruby is bottled when still relatively young, then aged in bottle. This yields darker plum colors, fruit and spice notes, and a more youthful and lively personality (though Ports mellow with time). Tawny is aged in cask before it hits the bottle, so it develops a more caramelized tone and color, with dried fruit and toasted nut aromas. These toffee notes have a lovely kinship with autumn soups like butternut squash and pumpkin.

Challenging to make and generally only produced in the best years, sweet wines have been prized since Ancient Roman times, and once were very popular in America—our founding fathers reportedly toasted with Madeira after signing the Constitution. But late-twentieth century Americans learned the notion that a wine couldn’t be sweet and serious. After decades of guzzling cheap, sweet jug wine, tastes veered sharply in the 80s and 90s toward dry wines, which were marketed heavily by America’s booming wine industry. Somehow, dessert wines got lumped in with white Zinfandel as lowbrow plonk. But really, these are process-driven drinks with definite bona fides. Wines such as Chianti’s Vin Santo, Germany’s Eiswein, the Jura’s Vin Jaune are, in fact, more rare and marvelous than credited. These wines may be as different as the countries that create them, but they all share one core commonality: pure, unadulterated pleasure.

There is one new three-starred restaurant in the new guide.

Our map reveals the most popular duty free spirits sold at different airports around the world. See the map now!

A seasonal twist on the classic screwdriver cocktail.

Red grape variety Öküzgözü, meaning “bull’s eye”, is the grape with the biggest fine wine potential in Turkey, according to the winemaker at one of the country’s top estates.

Thirsty Dragon? Symposium on the Wine Trade in China « The Wine Economist

Πηγή: Thirsty Dragon? Symposium on the Wine Trade in China « The Wine Economist

The republic’s diplomatic patience can only stretch so far, apparently. Read the latest wine news & features on wine-searcher